Past and future meet in the heart of the Alps, where Innsbruck’s world-famous sights, which testify to the Tirol province’s great past, stand alongside post-modern international architecture to create a fascinating blend.

Nestled amidst majestic peaks, this breathtaking city offers a unique combination of nature, history, and culture. You can stroll its streets full of Baroque and Gothic architecture in the Old Town, or discover one of the hip districts such as Mariahilf or St. Nikolaus where Innsbruck’s uni students like to meet for a drink. After, you can take a cable car from the city centre, and in just 20 minutes, reach the Seegrube at 2,000 m (6,562 ft). Here you can take in spectacular views of the Inn valley and the surrounding mountains.

The diverse attractions of the city – ranging from the famous Dance Summer to the Innsbruck Festival Week – coupled with the beautiful scenery make Innsbruck a destination that offers something for everyone.

Innsbruck is a magnificent city, offering architectural marvels, diverse restaurants, and amazing shopping.
Explore Innsbruck’s picturesque old city, and make your way to the Golden Roof (Goldenes Dachl), the city’s most famous landmark. Stroll along the bustling Maria Theresien Street and stop off at Das Schindler, a Gault Millau-awarded restaurant, for a delicious meal.

If you’re in the mood, explore Innsbruck’s young, hip areas: Mariahilf, St. Nikolaus, and Wilten square with their distinctive local shops, vegan restaurants and unique bars such as Kater Noster, John Montagu, or M+M Bar. Or visit an unusual museum such as the Grassmayr Bell Foundry.

Fancy some imperial splendour? Ambras Castle with its magnificent gardens, small waterfalls, and free-range peacocks takes you back to the Renaissance period. The Imperial Palace, Ottoburg, and the Wilten Basilica all tell of Innsbruck’s eventful past and its great figures including Philippine Welser, the secret wife of Archduke Ferdinand I, Andreas Hofer, the Tirolean freedom fighter, and last but not least Emperor Maximilian I, who built many of the monuments that survive today, e.g. the Golden Roof and his tomb at the Imperial Church. 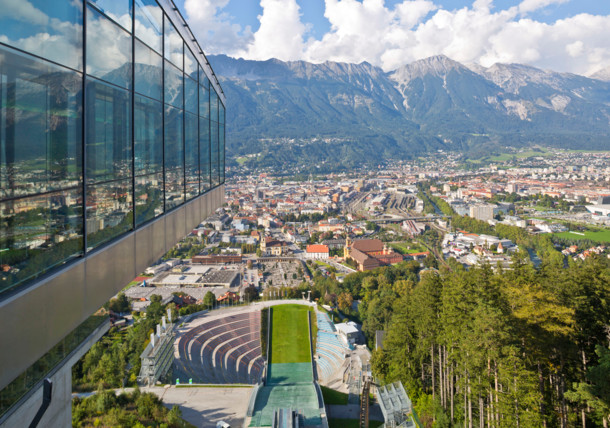 View from the Bergisel Ski Jump Tower in Innsbruck

For a city as diverse as Innsbruck, we recommend taking at least three or four days to fully experience it. For ultimate comfort, get the Innsbruck Card and take advantage of access to 19 sights, a return trip on 7 cable cars, and unlimited public transport.